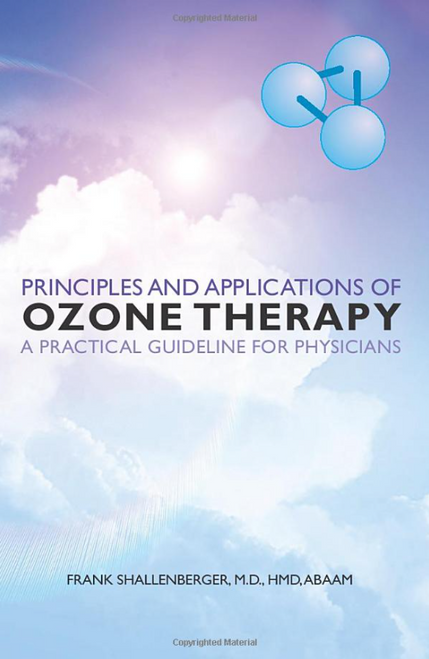 The Principles and Applications of Ozone Therapy â A Practical Guideline For Physicians is written by a practicing physician in the United States who has been using ozone therapy to treat patients or over 25 years. The book details how and why Dr. Shallenberger, an emergency room specialist, first became interested in ozone therapy. It then describes how his years of successful experience with it in a wide variety of medical conditions compelled him to discover how and why the therapy works so well. Ozone is a highly reactive form of oxygen. So he theorized that it works by enhancing the utilization of oxygen in the cells. In order to determine if he was on the right track, he developed a system which uses an FDA approved pulmonary gas analyzer to measure oxygen utilization. Then he began using that system in all of his patients.

He discovered two unsuspected findings:
â¢ First, many people, even those who feel great, are in a state of decreased oxygen utilization. They have plenty of oxygen in their bodies, but they are not using it efficiently.
â¢ Second, ozone therapy tends to correct this condition.

Based on these observations, Dr. Shallenberger then developed an entirely new paradigm for what causes disease and aging. He believes that the primary cause is decreased oxygen utilization. He presents biochemical and physiological evidence for this assertion. And then also presents evidence for how and why ozone therapy improve oxygen utilization, and in so doing, is instrumental in the treatment of many otherwise incurable medical conditions. The list includes cardiovascular diseases, chronic infections such as herpes and hepatitis C, macular degeneration, dental infections, chronic pain syndromes, degenerative joint conditions, and autoimmune diseases. Dr. Shallenberger shares his experiences with treating these diseases, and offers specific ozone therapy protocols which he has found to be effective. Dr. Shallenberger does not look at ozone therapy as a âmagic bulletâ. Instead he describes how it can be integrated with conventional approaches to yield better results. Dr. Shallenberger has been practicing primary care medicine since 1974. He is the Medical Director of The Nevada Center for Alternative and Anti-Aging Medicine, in Carson City, Nevada, and is considered the leading expert in ozone therapy in the United States. In 1991 he began training physicians in America and around the world in the various applications that he found ozone therapy to be so useful in. He has been teaching this course ever since. In 1995, Dr. Shallenberger developed a technique for pain management and joint reconstruction using a combination of ozone therapy and homeopathic therapy which he called ProlozoneÂ®. Now, hundreds of physicians from around the world are using this protocol to help their patients who suffer from chronic pain and degenerative joint disease. In 2010, Dr. Shallenberger was one of the original signers to The Madrid Declaration on Ozonotherapy. The Madrid Declaration was the first document to establish international scientific standards for ozone therapy. Later in 2010, he was elected to become a board member of the International Scientific Committee on Ozone Therapy. In December of 2010, Dr. Shallenberger established the American Academy of Ozonotherapy, and now serves as its first president. Dr. Shallenberger is the author of two popular lay medical books, The Type 2 Diabetes Breakthrough and Bursting With Energy, both of which feature ozone therapy. He has authored several scientific peer reviewed papers on ozone therapy, and is also editor of the Real Cures Newsletter. According to Dr. Shallenberger, "My medical experience leads me to believe that every practitioner needs to be familiar with these concepts and techniques in order to give their patients the best possible chance for success. That's why I wrote this book."

HOPE FOR MANY âHOPELESSâ DISEASES, FROM ONE OF THE FOREMOST RESEARCHERS IN THE FIELDWhen Randy McCloy, Jr., the sole survivor of the Sago Mine disaster, finally walked out of the hospital to...

The Superb Antioxidant That May Slow Aging. Repair Liver Damage, and Reduce the Risk of Cancer, heart Disease, and Diabetes Author: Burt Berkson, M.D., Ph.D. Are you looking for an effective way to...

Greens First is the quick, easy & delicious way for the entire family to get the recommended servings of fruits and vegetables! Enjoy the phytonutrient and antioxidant benefits of a diet rich in...

AntiCancer Living: Transform Your Life and Health with the Mix of Six

Brief Description: "An evidence-based plan to reduce cancer risk and support treatment, featuring six pillars of lifestyle change to support health and well-being. Most patients (and many doctors) do...

In the next 24 hours, over 2,500 Americans will die from Coronary Heart Disease (CHD). The financial impact of CHD during that same 24 hours will approach $5,500,000. Based on government health...

by Hugh Desaix Riordan, M.D. | Published: December 1988 | Length: 102 pages This book could just as accurately have been titled “One person can make a difference” or “Burn him at...