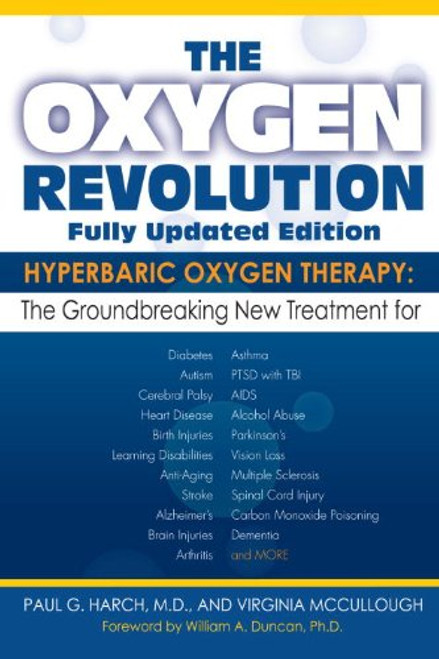 HOPE FOR MANY âHOPELESSâ DISEASES, FROM ONE OF THE FOREMOST RESEARCHERS IN THE FIELD

When Randy McCloy, Jr., the sole survivor of the Sago Mine disaster, finally walked out of the hospital to rejoin his family, it was in part due to the miracle of hyperbaric oxygen therapy. Hyperbaric oxygen therapy (HBOT) is based on an almost laughably simple idea: Oxygen can be used therapeutically for a wide range of conditions where tissues have been damaged by oxygen deprivation. Restore that oxygen, goes the logical thinking, and you can restore much of the lost function.

It seems too good to be true, but Dr. Paul G. Harchâs research and clinical practice has shown that this noninvasive and painless treatment can help the tens of millions of Americans who suffer from a brain injury or disease, such as:
Â· Stroke
Â· Autism and other learning disabilities
Â· Cerebral palsy and other birth injuries
Â· Alzheimerâs, Parkinsonâs, multiple sclerosis, and other degenerative neurological diseases
Â· Emergency situations requiring resuscitation, such as cardiac arrest, carbon monoxide poisoning, or near drowning

It can also improve conditions in which inflammation is the culprit, such as arthritis and asthma; promote healing in infections, burns, and skin grafts, such as diabetic foot wounds; and slow the aging process.

For the millions of Americans suffering from these seemingly âhopelessâ diseases, here finally is the handbook of hope. Inspiring and informative, The Oxygen Revolution is the definitive guide to the miracle of hyperbaric oxygen therapy, from a pioneer in the field.

The Principles and Applications of Ozone Therapy â A Practical Guideline For Physicians is written by a practicing physician in the United States who has been using ozone therapy to treat patients...

The Superb Antioxidant That May Slow Aging. Repair Liver Damage, and Reduce the Risk of Cancer, heart Disease, and Diabetes Author: Burt Berkson, M.D., Ph.D. Are you looking for an effective way to...

In the next 24 hours, over 2,500 Americans will die from Coronary Heart Disease (CHD). The financial impact of CHD during that same 24 hours will approach $5,500,000. Based on government health...

Magnesium is an essential nutrient, indispensable to your health and well-being. By adding this mineral to your diet, you are guarding againstâand helping to alleviateâsuch threats as heart...

AntiCancer Living: Transform Your Life and Health with the Mix of Six

Brief Description: "An evidence-based plan to reduce cancer risk and support treatment, featuring six pillars of lifestyle change to support health and well-being. Most patients (and many doctors) do...

The painstaking work of digging through every nugget of recent medical research on magnesium revealed a grand picture that even the medical visionary Thomas Levy didn't anticipate. The bottom line is...

Why MSM 1 lbs.? MSM is highly soluble in water and concentrates in atmospheric water vapor, returning to earth in rain. MSM is present in fresh fruits and vegetables in amounts ranging from 1 to...