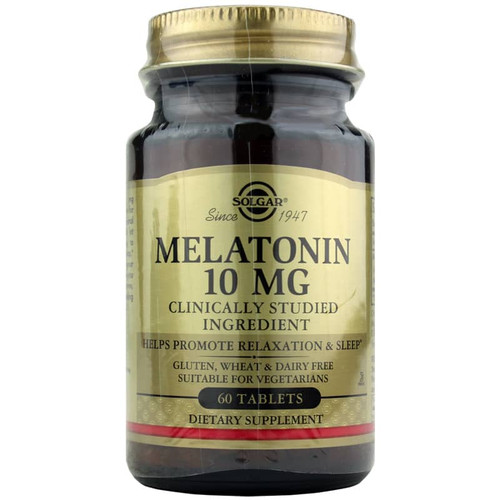 Melatonin is a hormone produced by the pineal gland of all mammals, including humans. The pineal gland is a small, light-sensitive organ located in the brain that secretes melatonin only during darkness. Humans begin producing melatonin as early as 3 months old. The production of melatonin increases until about age 20 at which point melatonin production begins to decrease.

Melatonin affects a number of processes in humans such as sleep and temperature. Melatonin also appears to play a role in the promotion of growth and maturity.

Low levels of melatonin in humans have been associated with depression, fibromyalgia, insomnia, some seizure disorders, and other conditions.

Solgar® Melatonin 10 mg tablets are a terrific choice for people experiencing occasional sleeplessness, those with jet lag or anyone wanting to promote sound, quality sleep. This product works with your natural sleep cycle to give you the tranquil rest you deserve, so you can awaken feeling refreshed and revitalized.

*These statements have not been evaluated by the FDA. This product is not intended to diagnose, treat, cure, or prevent any disease.

ALSO CONTAINS:
Dicalcium phosphate, microcrystalline cellulose, vegetable cellulose, vegetable stearic acid, silica, vegetable magnesium stearate.
BRAND:
Solgar
DIRECTIONS:
As a dietary supplement for adults, take one (1) tablet at bedtime as Melatonin may produce drowsiness, or as directed by a healthcare practitioner.
DOES NOT CONTAIN:
Gluten, wheat, dairy, soy, yeast, sugar, sodium, artificial flavor, sweetener, preservatives and color.
INGREDIENTS:
Melatonin (N-Acetyl-5 Methoxytryptamine)
QUANTITY:
60 Tablets
WARNINGS:
Not intended for use by pregnant or nursing women. If you are taking any medication or have a medical condition, please consult your healthcare practitioner before taking any dietary supplement. Do not drive, operate machinery or consume alcohol whe

Hormone precursor to support the immune system, mood, and memory

Vitamin B2 (riboflavin) plays a role in cellular respiration, keeping the machinery that turns food into energy running smoothly. It is a precursor to coenzymes involved in the growth and repair of...

The privately formulated Riordan Clinic D3/K2 supplement combines the amazing healing capacity and safety of Vitamin D and vitamin K into the convenience of one capsule to support optimal bone health...

Theracurmin is a novel preparation of turmeric that utilizes patented, colloidal dispersion technology to enhance bioavailability and dramatically increase curcumin levels in the blood. Unlike other...