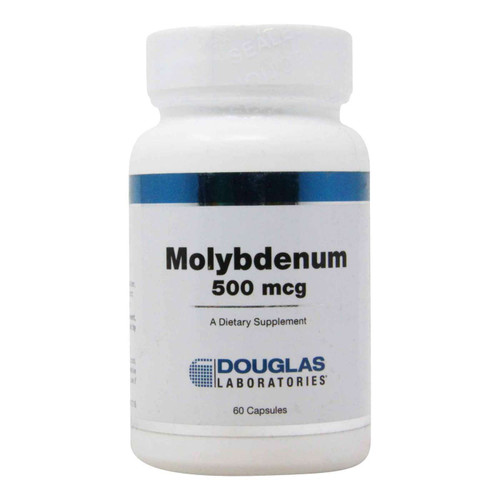 Molybdenum is an essential trace mineral that functions as a cofactor important to detoxification. It is absorbed into your blood from your stomach and gut, then carried to your liver, kidneys and other areas. However, studies have shown that your body doesn't absorb it well from certain foods, particularly soy products.

The molybdenum cofactor activates four essential enzymes, which are biological molecules that drive chemical reactions in the body.

Molybdenum's role in breaking down sulfites is especially important as sulfites are found naturally in foods and also sometimes added as a preservative. If they build up in the body, they can trigger an allergic reaction that can include diarrhea, skin problems or even breathing difficulties.

*These statements have not been evaluated by the FDA. This product is not intended to diagnose, treat, cure, or prevent any disease.

Chromium is a trace mineral that plays an important role in fat and lipid metabolism, enzyme activation, glucose support, and carbohydrate utilization. Chromium picolinate is a highly utilizable form...

Methlycobalamin is the active coenzyme form of Vitamin B12. In this form it is bioidentical to one

Biotin is an essential coenzyme for a variety of carboxylation reactions, and is involved in the metabolism of fats, sugars and amino acids. Biotin is crucial for the utilization of glucose for...

Vitamin B12 is part of a group of essential nutrients known as the B Complex. It supports energy metabolism and promotes a healthy nervous system. Along with Folic Acid and Vitamin B6, it supports...

Methyl B12 Plus, each natural cherry flavored sublingual tablet contains natural bioactive B12 as Methylcobalamin, folate as natural l-5-Methylfolate, and vitamin B6 as pyridoxine HCl...

Vitamin B2 (riboflavin) plays a role in cellular respiration, keeping the machinery that turns food into energy running smoothly. It is a precursor to coenzymes involved in the growth and repair of...

Vitamin B12 is part of a group of essential nutrients known as the B Complex. It supports energy metabolism and promotes a healthy nervous system. Along with Folic Acid and Vitamin B6, it supports...

Alpha Lipoic Acid (ALA) is a fat-soluble and water-soluble antioxidant. In cells, the reduced form can regenerate antioxidants such as glutathione, vitamin C and vitamin E. This product is also...

Stem-Kine capsules are a proprietary nutritional supplement that has been clinically demonstrated to increase the amount of stem cells circulating in the body for an extended period of time. These...

IVC-Max capsules are a potent Vitamin C potentiator. Vitamin C is a dietary supplement with many health related effects. In some cases, the benefits of Vitamin C are best achieved with large...